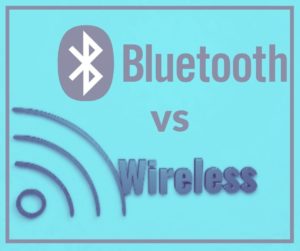 Wireless is a trend today! Bluetooth is one form of wireless technology. The difference between Bluetooth and wireless are in their usability and technology.

So maybe you’re one of those who think Bluetooth and Wireless are the same things. Ah! Don’t worry, you are not alone!! Many folks are confused with these terms as these two technologies are very similar.

Bluetooth and Wireless are many times considered interchangeable terms as many think both have the same definition. However, it is not true. In terms of technology, both are quite different from each other.

Gone are the days when we were crazy managing the wires for all electronic devices. Now, most of the electronic gadgets mobile, laptops, tablets, etc come with built-in Bluetooth and wireless technology to maintain the trend of technology.

For our esteemed readers, we have tried to explain both technologies and listed out the difference between Bluetooth and wireless as below:

1. First of all, both have different symbols to represent them.

2. Both technologies provide wireless communication using radio signals. While Bluetooth provides connectivity between devices that are placed at a short-range distance, Wireless is to provide high-speed internet connectivity.

3. The Bluetooth radio signal range is limited to 10 meters but Wireless connectivity range is 100 meters.

4. Bluetooth is preferred as it consumes low power while Wireless consumes more power.

5. Security features are less in Bluetooth, however, Wireless provides more security for connectivity.

6. Bluetooth needs less bandwidth as the data transferred is less as compared to Wireless networking.

7. Bluetooth is generally limited to the number of devices to get connected with other Bluetooth devices. On the other hand, Wireless provides connectivity to more users.

What is Bluetooth Technology?

Bluetooth is also named as “short-link”. It is a wireless technology that pairs and connects two or more devices placed at a relatively shorter distance from each other. These devices broadcast radio signal from inbuilt computer chip which further is detected by another device that has the same signal broadcasting chip. This is the way Bluetooth technology work.

The Bluetooth technology was developed with the motive of discarding cables or wires and still make communication possible between devices placed next to each other.

“Bluetooth” term is derived from Harald Bluetooth one of the characters in the novel “The Long Ships” written by Frans G. Bengtsson. The novel is about Vikings and King Herald Bluetooth.  Since King Herald united dissonant Danish tribes into a single kingdom, so inspired by him, Jim Kardach of Intel has proposed the name Bluetooth in 1997. Just like king Bluetooth, technology Bluetooth was developed to unite different electronic devices.

Do check our article on Latest Bluetooth Version 2020 to know more about Bluetooth Technology.

What is Wireless technology?

Wireless technology is also based on radio signals just like Bluetooth. It is also known as Wi-Fi (Wireless Fidelity). The name is suggested by Wi-Fi alliance to IEEE 802.11 suite of standards.

The functionality of Wi-Fi depends on the connectivity to the internet using a wireless router. So if your device is Wi-Fi enabled device but you are not connected to the internet signal, then the device can not be used for its full potential.

FAQs related to Bluetooth and WiFi

Which is better Bluetooth or Wireless?

Both have different purposes. If you have to transfer small junk of data in less time and do not have a dependency on the internet, Bluetooth is preferred. Many electronic gadgets like speaker, headphones, mouse, keyboard, car adapters use Bluetooth technology to connect to your laptop or smartphone.

Can Bluetooth be used without Wi-Fi?

The answer is ‘YES’. Bluetooth works perfectly fine without Wi-Fi. It does not need any internet to pair or connect devices via Bluetooth. However, many Bluetooth devices are designed to connect to the internet using wireless technology.

Which has more security Bluetooth or Wireless?

Both have security features implemented. To pair any devices using Bluetooth, the receiver has to ‘accept’ all incoming data exclusively.

Difference between Bluetooth and Wireless in terms of data usage:

Since Bluetooth does require any internet, so this technology uses zero data. Wi-fi also does not use any mobile data as it will be connected to the wireless router which further gets internet from LAN. However, if the settings on your phone are to switch to mobile data automatically when there is no Wifi, then mobile data is used. You can always look for these settings and change accordingly to reduce mobile data usage.

Tags: difference between bluetooth and wireless

How to connect Bluetooth Speaker to Laptop